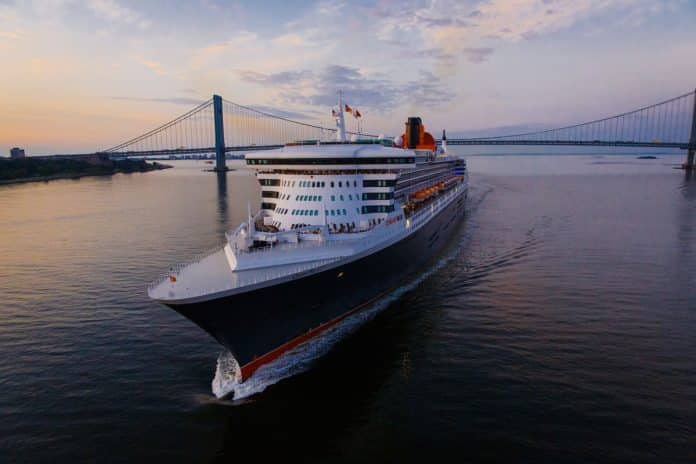 As Meryl Streep’s character, famed novelist Alice, steps out of the taxi upon arriving at the Brooklyn Cruise Terminal, she gazes in awe at Cunard’s flagship Queen Mary 2 dwarfing the port, a magnificent site, even to the most veteran cruise passenger. This is one of the opening scenes of the new film, “Let Them All Talk,” directed by the award-winning Steven Soderbergh, now streaming on HBO Max. Streep’s character is sailing aboard the grand ocean liner as a special guest of the voyage’s enrichment program, Cunard Insights.

The three-time Academy Award® winner Streep is joined by fellow acting royalty, two-time Academy Award® winner Dianne Wiest, and five-time Emmy Award® winner Candice Bergen. Supported by Academy Award® nominee Lucas Hedges and actress Gemma Chan, the film is set aboard the storied Transatlantic Crossing, amidst the backdrop of Queen Mary 2’s inimitable style, elegance and luxurious surroundings. In fact, the majority of the film was shot on board in some of the vessel’s most beloved spaces: the atmospheric, Art Deco Commodore Club, the sumptuous Queens Grill suites and dining room, the Royal Court Theatre and the 9,000 volume library, just to name a few.

As the film was captured aboard a live voyage, many on board guests had a chance to grab their moment in the spotlight when they were cast as extras in the film.

“We were absolutely delighted when Steven Soderbergh approached us to film his next feature on board Queen Mary 2,” said Simon Palethorpe, President, Cunard. “While  Cunard and our flagship are accustomed to hosting luminaries from all over the globe, it was quite something to welcome Steven, Meryl, Dianne, Candice, Lucas and Gemma for this very special and unique opportunity. We are very excited about the film, its witty and engaging story and how lovingly Steven captured the essence of our flagship and the Transatlantic Crossing experience.”

Deadline commented that the film’s “highly sophisticated and elegant filmmaking is one of Soderbergh’s finest…” which resonates with the atmosphere on board, and very well reflected in the production. The viewer can almost experience the leisurely and luxuriant pace of the Crossing, and the allure of this iconic voyage.

Commenting on his experience aboard Queen Mary 2, Soderbergh said: “Color me well impressed. I have never seen an enterprise on this scale of complexity run so beautifully. Every Cunard staff member we interacted with was committed to providing the best possible experience for their guests, which in this case included our cast and crew. And I can confirm without question that as stunning as Queen Mary 2 looks on camera, she’s even more stunning to the naked eye.”

John Shallohttp://www.cruiseaddicts.com
John Shallo is the founder and editor of Cruise Addicts. Since 1999 it has been a leading destination for cruise travelers and self professed Cruise Addicts looking for the latest news, ship reviews and travel tips.

MSC Seaside Returns To Sea In The Mediterranean

View All Cruises
Powered by Cruiseline.com

MSC Seaside Returns To Sea In The Mediterranean