In the 2021-22 season Costa Cruises will deploy Costa Favolosa and its new flagship Costa Toscana in South America. The Costa Favolosa season will be even longer, almost 5 months, starting from 20 November 2021 with embarkations in Santos, Rio de Janeiro and Itajaí.

Costa Toscana will make its debut in Brazil on 26 December 2021, offering one-week cruises along the Brazilian coast, with embarkations in Santos and Salvador. The arrival of the next-generation ship will reinforce the special 72-year relationship between Costa Cruises and Brazil.
SÃO PAULO, Oct. 27, 2020 /PRNewswire/ — Costa Cruises, the leading cruise line in Europe and a part of Carnival Corporation & plc (NYSE/LSE: CCL; NYSE: CUK), today presented its programs for the 2021-2022 season in South America during an online conference led by Dario Rustico, the brand’s general manager for Central and South America.

For its restart in South America, the Italian cruise line will introduce two exciting developments: its new flagship Costa Toscana will make her debut in Brazil, and Costa Favolosa will extend her season to almost five months.

“The arrival of Costa Toscana is a historic moment for Costa Cruises, for the entire cruise industry and for Brazil,” said Rustico. “The debut in Brazil of our most innovative ship strengthens the special 72-year long bond between Costa Cruises and South America. Costa Toscana promises to be a highly popular attraction in 2022, enabling our guests to enjoy memorable experiences, five-star dining, high-tech entertainment, and the pure joy and relaxation that comes with being on the open sea.”

Costa Toscana is currently under construction at the Meyer shipyard in Turku, Finland. With gross tonnage of over 180,000 tons and more than 2,600 staterooms, including a new cabin category with balcony and terrace, she is the sistership to the recently introduced Costa Smeralda. As with her sister ship, Costa Toscana will retain the inimitable Italian hospitality that has been Costa Cruises’ hallmark since the brand’s inception, providing great holiday experiences for its guests, whether new to cruise or among the brand’s large number of loyal cruisers. 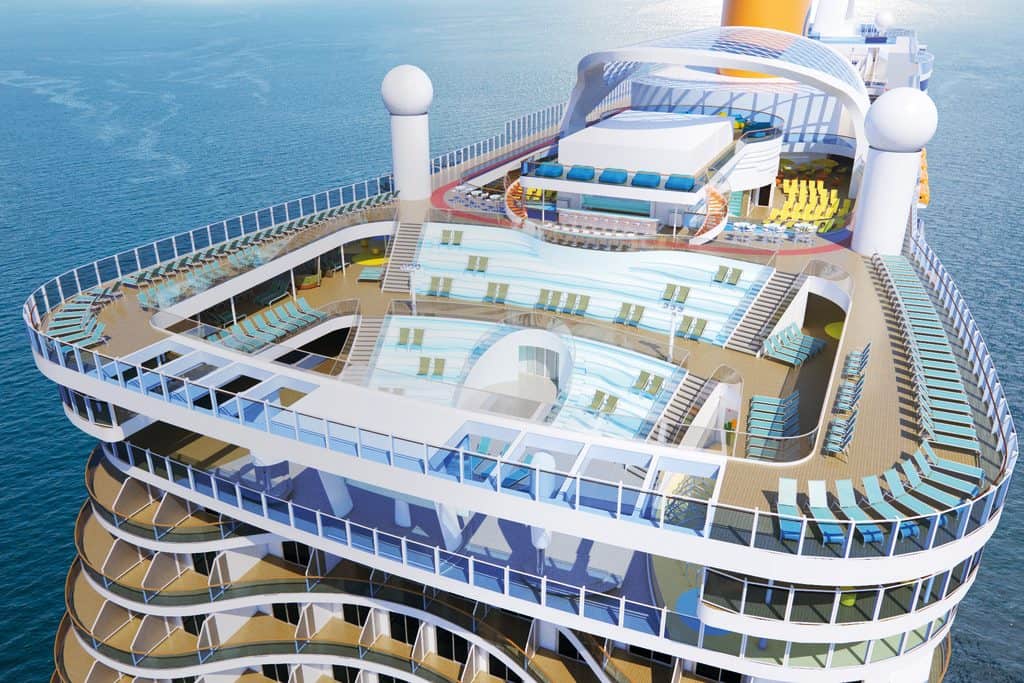 The inaugural cruise of Costa Toscana will include New Year’s Eve, as it will depart from Santos on 26 December 2021 for a seven-night holiday to Salvador and Ilhéus, returning to Santos on 2 January 2022 for what will be an unprecedented moment in the history of the Brazilian cruise industry.

From 2 January to 10 April 2022, Costa Toscana will offer another 15 cruises with the same itinerary, with embarkation in Santos and Salvador. The 15 cruises also include Carnival and Easter departures. The latter will be the last tour of the ship before the Brazil-Italy crossing, departing from Santos on 17 April 2022.

Starting 20 November 2021, Costa Favolosa will be cruising in South America for 144 days, almost five months, the longest season in the history of Costa Cruises in the region. The ship will offer five cruises, from three to six nights, calling at Búzios, Salvador, Ilhabela and Balneário Camboriú, with embarkation from Santos.

From 13 December 2021 to April 2022, Costa Favolosa will depart from Rio de Janeiro for her traditional “Prata” itinerary. A total of 15 eight-night cruises will be available, with embarkation – for the first time – in Itajaí, in addition to Buenos Aires and Montevideo. Costa holidays in the Prata region also include Christmas, New Year’s Eve and Carnival. This itinerary will allow guests to visit popular destinations, such as the cities of Rio de Janeiro, Ilhabela, Itajaí, Montevideo (Uruguay) and Buenos Aires (Argentina). Costa Favolosa’s New Year’s itinerary will maintain her traditional New Year’s Eve stop at Copacabana beach and its fireworks display.

The 2021-2022 season will also be marked by the Italy-Brazil and Brazil-Italy crossings on board Costa Favolosa. These cruises allow tourists to visit different places in the world at once. Departing from Savona on 2 November 2021 for an 18-night tour, Costa Favolosa will visit the charming destinations of Marseille, Barcelona, Malaga, Casablanca and Santa Cruz de Tenerife, in addition to the Brazilian cities of Recife, Salvador, Ilhéus and Rio de Janeiro. Her return cruise to Europe will start on 16 April 2022 from Rio de Janeiro for a 15-night voyage calling at Salvador, Maceió, Santa Cruz de Tenerife, Malaga and Barcelona before reaching Savona on 1 May 2022.

Costa Toscana will be representing a tribute to the very best of Italy and especially Tuscany, one of Italy’s loveliest and most popular regions. On board all the decks and public areas are named after – and designed based on – iconic Italian places. The food and wine offerings on board will feature the finest Italian culinary traditions, with the collaboration of prestigious partner suppliers fostering the best of Italian culinary traditions. The ship will have 13 different restaurants, 18 bars, a splendid spa area with 16 treatment rooms, an onboard waterpark with waterslides, four pools and a dedicated facility for kids.

Brazilian travelers already had the chance to become familiar with Costa Favolosa, as she has previously sailed in South American waters. Inspired by the fantastic universe of a fairy tale, Costa Favolosa resembles an enchanted castle and the works of art reproduce the great palaces of the world. With more than 1,500 staterooms, the ship brings together the spa wellness center (with fitness center, spas, swimming pools and thalassotherapy, treatment rooms, sauna, Turkish bath, UVA solarium, cabins and suites). Other features include Cinema 4D, four swimming pools, five restaurants, 13 bars, theater, water slide, casino, sports court and children’s club.

The Best Cruises for College Students

Are You A Good Fit For Costa Cruises? Check Here And See